The early grades were not easy for Joshua Joseph. Trouble seemed to find him.

“I had anger issues,” Joshua, now 14, said. “People would make fun of me. Since my mom is not the richest, sometimes I would have mismatched socks, or my shoes would be dirty.”

That made Joshua a target at his district school. And, he admitted, he didn’t turn the other cheek when trouble came calling.

His mother, Elide, didn’t care who was the instigator. All she saw was a son who had a habit of making bad choices, whether it was controlling his anger or his choice of friends. The combination was hurting her son academically.

“He was bad,” Elide said with a sigh.

And she had enough. 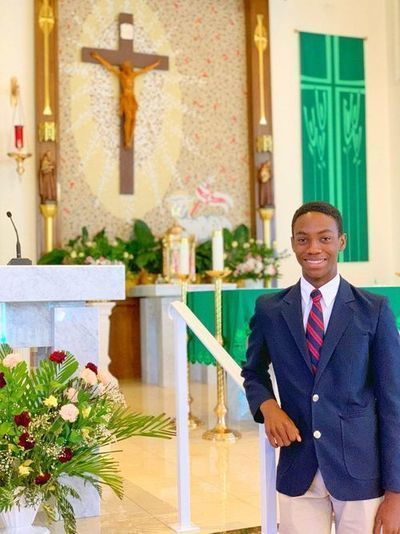 With the help of a Step Up scholarship, Joshua turned his life around at
Sacred Heart Catholic School in Lake Worth, Florida.

A long-time parishioner at Sacred Heart Church in Lake Worth, Florida, Elide wanted to move Joshua to Sacred Heart Catholic School, a private pre-K-8 school near their home. She hoped a Catholic education and the small-classroom setting would work better for Joshua. Elide, a nursing assistant, was thrilled when she learned of the Florida Tax Credit Scholarship, managed by Step Up For Students, which provides private school opportunities for economically disadvantaged families. Joshua entered Sacred Heart in the fourth grade.

“She was looking for something different for Joshua,” Sacred Heart Principal Tricia Duvall said. “These are the families that the scholarship really, really helps. They want it, and they’re willing to work and partner with the school.”

Joshua wasn’t excited about switching schools. The transformation was gradual. But he is now in the eighth grade, and has experienced a dramatic change in behavior, attitude and grades. And, in what might be a surprise to those who knew Joshua when he was younger, he is the Sacred Heart Student Council president.

This is everything Elide envisioned for her son when she made the move to change schools.

Looking back now, Joshua knew he was on a dangerous path.

“If I stayed at my old school, I … probably would have ended up in juvie (juvenile detention),” he said.

As principal, Duvall said she is trying to change the culture where some students view getting in trouble as being “cool.” It’s not a Herculean task, given there are only 250 students in the school. But she needs help from some students.

And that’s where Joshua comes in.

He’s now a leader in the cause for avoiding trouble.

“Absolutely,” Duvall said. “He embraces that.”

In fact, Duvall thinks the example that Joshua sets for other students played a role in his election as president. 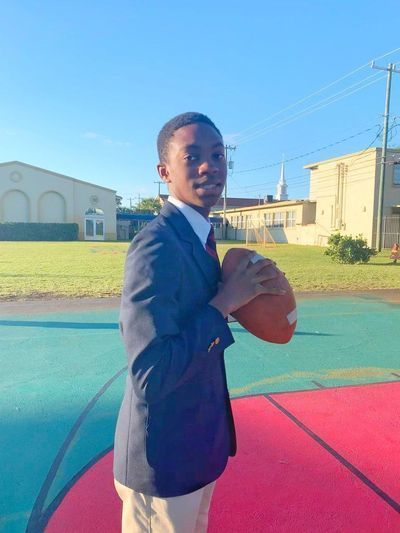 Joshua has big plans for his football career.

“He’s kind to everyone,” Duvall said. “He’s friendly to everyone. He has a good sense of humor. He’s never disrespectful ever. That carries into everything, he treats everybody with respect.”

Said Joshua: “The whole school basically knows me. They are my friends.”

“In my other school, I had anger issues. People would make fun of me. But Sacred Heart changed me and made me understand that sometimes people’s opinions doesn’t really matter.”

Duvall told Joshua that the Student Council president has to be the leader of the school. During school spirit week, Joshua would have to show the most spirit, which he did. He also took the lead during a recent beach cleanup and a December fundraiser to feed the homeless.

Joshua has big plans for his future.

He currently is a defensive lineman on his youth football team, but he hopes to become a running back. That’s why he wants to attend Cardinal Newman High in West Palm Beach. He wants to be part of the Crusaders’ football program.

“He aspires to get there.” Duvall said. “So, he’s always asking, ‘Have you heard anything? Do you know when admission is open? Do they have scholarships available? What kind of GPA do I need?’ He’s asking the questions that if you knew him three or four years ago, you probably wouldn’t have thought he’d be asking them, because he was so unfocused.”

Sacred Heart School was founded in 1944 and serves approximately 250 students in PreK 3–8, including 109 on the FTC Scholarship and 55 on the FES Scholarship. It is a Catholic school with a mission to “provide all students, of diverse cultures and abilities, an education of excellence, in a Christ-centered environment.” Sacred Heart is accredited by the Florida Catholic Conference. Tuition is roughly $10,300 and all students take the TerraNova assessment.

Roger Mooney, marketing communications manager, can be reached at rmooney@sufs.org.